Warren Buffett’s Apple stake is now worth an astounding 20% of Berkshire Hathaway’s market capitalization, reflecting investors’ excitement about the tech titan and concerns about the staid conglomerate.

The famed investor’s company owned about 245 million Apple shares on March 31, according to the latest data available. Apple’s stock price has surged by 44% since then, from about $254 to more than $366 at the close of trading on Monday. Meanwhile, Berkshire stock has slid 1% over the same period.

Assuming Buffett hasn’t touched his Apple holdings, Berkshire’s stake has mushroomed in value from roughly $62 billion to almost $90 billion, or more than a fifth of Berkshire’s $440 billion market capitalization.

Read More: Dave Portnoy, the poster child of the day-trading boom, told us why he thinks Warren Buffett is ‘past his prime’ and was wrong to ditch airline stocks

The milestone was first spotted by Bespoke Investment Group on Twitter.

The 20% figure is shocking because Apple is just one stock in Berkshire’s portfolio, which was valued at more than $175 billion at the end of the first quarter.

Berkshire also boasted $137 billion in cash and short-term investments at last count, valued its total assets at $760 billion, and generated about $255 billion in revenue and $82 billion in net earnings last year from its insurance firms, railroads, utilities, energy providers, manufacturers, and other businesses.

Read More: Dennis Lynch and Kristian Heugh run the best large-company stock funds of the last 10 years. The legendary investors break down the 5 principles that guide their quest for long-term growth.

Buffett has personally weathered fierce criticism for being too cautious during the coronavirus pandemic and failing to put his massive cash pile to work.

Berkshire made only $1.8 billion in net stock purchases in the first quarter, sold a net $6.1 billion in stock in April, and failed to make a major acquisition, strike any bailout deals, or buy back much of its own stock when the market crashed.

Read More: Morgan Stanley handpicks 10 stocks to buy now for the richest profits as travel and outdoor activities transform in the post-pandemic world

Here’s a chart showing the decline in Berkshire’s market cap this year and how its Apple stake has grown as a percentage of its market cap: 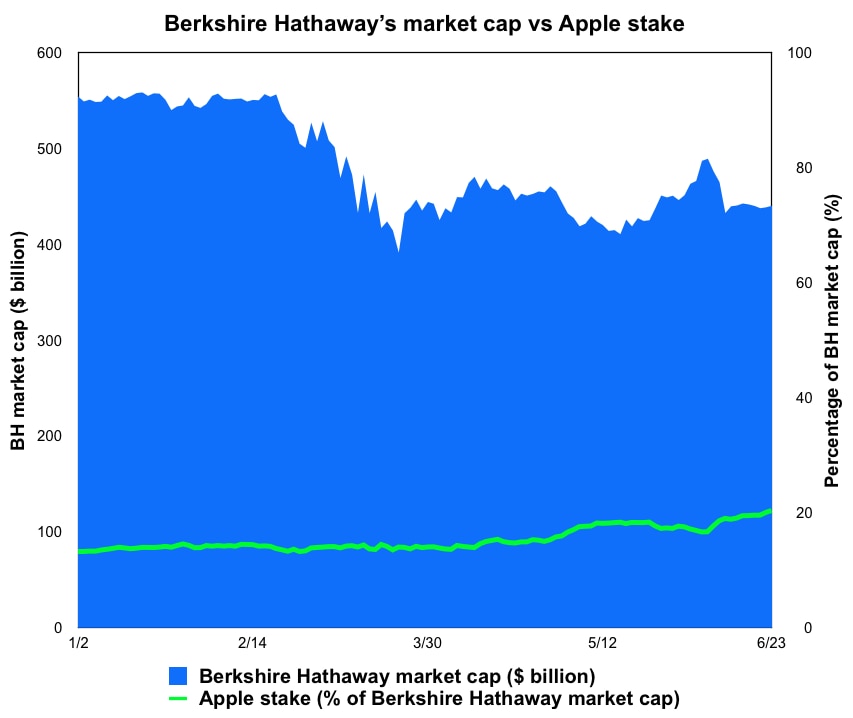